The Education Minister of Gujarat Government has made an important announcement. The decision to start teaching Std 10 and 12 and post graduate, undergraduate last year from January 11, will be applicable to all boards, including all boards of Gujarat State, cbsc board: will be implemented under the sop of Central Government. All schools must strictly adhere to Corona's guidelines. 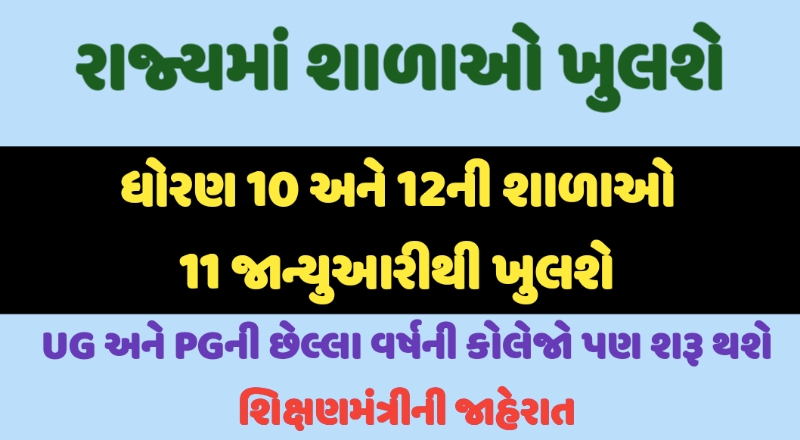 All sop has been sent to the institute by the education department. The education minister has made an important statement that administrators must keep the school clean. Masks including thermal guns have to be arranged. All students must also have their temperature checked.

Students will not get mass promotion in Gujarat

We will take as many exams as we can teach: Bhupendrasinh

Students will not get mass promotion in Gujarat

Students must obtain parental consent
Attendance of students in school is not compulsory
Online education will also continue: Bhupendrasinh
The decision to start another standard will be taken in stages
The SOP of the Central Government will be followed

Social distance must be observed

Schools closed for last 10 months in Gujarat will now be reopened, Education Minister Bhupendrasinh Chudasama announced about reopening of schools in Gujarat, regular education work of standard 10 and 12 will be started in Gujarat, all schools will have to continue online education along with offline education, center for standard 10 and 12 students The Gujarat government has decided to start schools as per the guidelines of the government, social distance must be followed, a big decision of the state government regarding starting schools in the state, no mass promotion to any students, but examinations will be conducted as per the syllabus.
The government has taken the biggest decision on the issue of starting schools in the state at the start of the new year. The state government has announced to open Std 10 and Std 12 schools from January 11. After the decision was taken in the cabinet meeting, Education Minister Bhupendrasinh Chudasama officially announced the opening of schools. In addition to standard 10 and 12, post graduate and under graduate final year classes will also be started. This rule will apply to all boards including CBSC. Bhupendrasinh said the schools would be reopened with strict implementation of the central government's SOP.