AHMEDABAD: The constant chants of devotees and the usual crowds might be missing from Jagannathji Temple premises on Monday – on eve of the Rath Yatra – but for those visiting the temple for decades, it was nothing amiss in terms of preparedness. 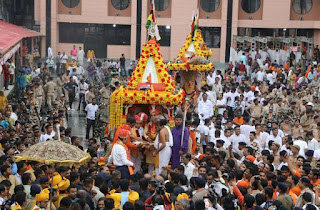 The elephants were painted, the entire temple premises were decorated with flowers and lights and the chariots were kept ready like every year. The day was even dotted by the high-profile visits including Gujarat CM who performed the evening aarti. In the evening, tractors were brought in to check the chariots, giving rise to the speculation that the chariots could be pulled by a vehicle instead of khalasi youth as is usual. The temple trustee Mahendra Jha said that they were hopeful of getting a permission for carrying out the procession. “But we appeal to the devotees to maintain social distancing and follow all rules – including a possible curfew – to make it a success,” he said. Sources close to the development said that the temple authorities even explored the possibility of a limited procession in the block of about 500-600 metres and returning to the temple, before the state government announced that they would approached the Gujarat high court to allow the procession with restrictions. The flow of devotees was controlled right from Jamalpur Darwaza by city police to ensure that there is no crowding at the temple. The news of nod for procession at Jagannath Puri infused new vigour among the visitors who hoped that the city will also be allowed to carry out procession. “It’s after all a tradition of 142 years and just the procession with chariots with minimal persons could be a feasible option,” said a devotee.
The Gujarat government on Monday approached the high court for modification of its earlier order staying the procession of Lord Jagannath Yatra in Ahmedabad, which was supposed to be taken out on June 23.

Chief Minister Vijay Rupani said he had directed the state Advocate General to approach the high court and request it to allow the annual procession.


The HC had on Saturday stayed the procession in the light of coronavirus pandemic in Ahmedabad.

The court had also questioned local authorities over the delay in taking a decision on an application filed by the Jagannath Mandir Trust.

Rupani's comments came hours after the supreme court allowed holding of the procession in Puri in Odisha with restrictions by modifying its earlier order.

"The Gujarat government has also informed the Advocate General to request the High Court to allow the historic Rath Yatra in Ahmedabad like the apex court did in Puri, with whatever restrictions the high court places for the procession," Rupani said.

The Rath Yatra, organised annually by Shri Jagannathji Mandir Trust, is one of the most popular religious festivals in Gujarat.

Earlier in the day, the high court refused to entertain a plea moved by an NGO seeking modification of its order staying the procession and allowing the same with certain restrictions.

The civil application moved by the NGO, Hindu Yuva Vahini, for urgent circulation on Monday came up for hearing before a division bench of Chief Justice Vikram Nath and Justice J B Pardiwala.

The bench refused to entertain the plea, saying the temple's chief priest himself has told the media that on June 23, the holy chariot of Lord Jagannath and other Gods will be taken out within the temple premises to protect the health and well being of devotees.

The NGO's plea, moved earlier in the day, urged the HC to modify its Saturday order to the extent as to allow the authorities to take out a symbolic Rath Yatra from the Jagannath temple in Ahmedabad on its scheduled date in a limited manner with only three holy chariots and within the shortest possible route without involvement of members of the public.

The division bench had in its Saturday order said there will be no Rath Yatra this year in view of the COVID-19 pandemic, and no activities -- 'secular or religious' -- associated with the event during this period.

The court's June 20 order came on a PIL moved by a journalist, Hitesh Chavda, seeking its direction to not allow the Rath Yatra this year as it could cause coronavirus cases to rise sharply.

The Hindu Yuva Vahini, through its lawyer Vivek Bhamre, had sought to implead itself as a third party intervener to represent the devotees of Lord Jagannath, who it said, have not been represented in the PIL.

The NGO said the annual Rath Yatra, 'an important event in the history of Ahmedabad', has been taken out every year since 1878, even during curfew, and the religious event is a symbol of communal harmony.

The applicant said that while the present situation is unprecedented and safety and security of the general public is paramount, the Yatra can be allowed in a limited form with little public participation along the shortest route possible.

"The Rath Yatra was introduced in the year 1878, and the gesture of the Lord himself coming out with his brother and sister on holy chariots is significant...Rath Yatra was not cancelled even once in the last 142 years, not even during testing times. The procession was even taken out during curfew," the NGO said.