The country is in lockdown due to the global epidemic Corona virus spread from China. But on the one hand, public life has come to a standstill due to this lockdown. On the other hand, the incidence of online fraud has also increased in different ways. According to media reports, a new way of cheating on social media instant messaging app WhatsApp has come up. 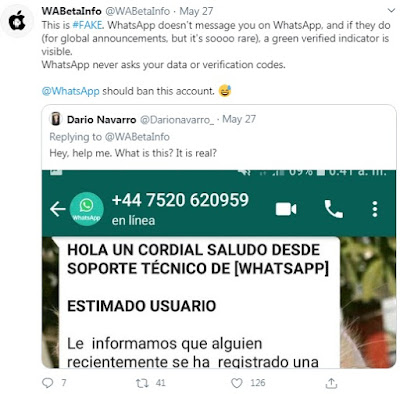 According to the information, an account under this claims to be close staff of WhatsApp and asks users to share their verification code. WABetaInfo, a platform that provides information on WhatsApp's features and updates, has informed the public about the scam by tweeting. According to WABetaInfo, the fraudster claims to be a WhatsApp user staff to appease users and steal private information from a smartphone through a WhatsApp account. This increases the chances of major fraud from a bank account.

According to the information, these people use the WhatsApp logo as a profile image and deceive the users. The company said WhatsApp's team does not use the messaging app to contact users. WABetaInfo tweeted information about the fraud. A user on Twitter asked about the suspicious message. Which was sent to him. Users took a screenshot of this message and sent the message in Spanish.

Some people have started getting messages in the name of WhatsApp's technical team. This message is actually a link to hack. As soon as the message arrives, a verification code of six numbers is sent via SMS. When people see the code in this message, they think it is from WhatsApp. Because its appearance is kept that way. But the fact is that no such verification is done by WhatsApp or any of their technical team is working for this.

Technology experts said not to respond to such messages. Because after you answer your phone can be hacked and someone else can use WhatsApp registered on your number. So the recipient of the message thinks that the message came from your number, which in fact was sent by hackers.

Mobile operating system Android, on the other hand, has been targeted by Chinese spyware. According to the research team, this spyware has been installed in about 100 million Android devices. The job of spyware is to spy on the phone by entering it. This means that spyware can send photo-videos, other information, banking details in the phone to a third party and the phone holder is not even informed.

This spyware has been developed by the Chinese video app company Vivavideo. This app is already controversial. Vivavideo was also included in the list of 20 suspicious apps released by the Indian government in 2012. This app works by spying on the phone.