No Need Pass To Travel Other District in the State

There is no need to pass from one district to another in the state: Deputy Chief Minister 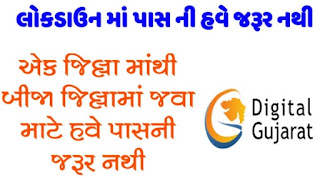 Deputy Chief Minister Nitin Patel today inspected the new building of the UN Mehta Hospital in Ahmedabad with a view to expedite the treatment of Corona patients. He was accompanied by Principal Secretary for Health Jayanti Ravi. After the visit, Nitin Patel said that except for the containment zone, there is no need to pass from one district to another in the state.

He also visited and inspected the new building of UN Mehta Hospital in Ahmedabad for the purpose of speedy treatment of Corona patients. After visiting the Civil UN Mehta Hospital, Deputy Chief Minister Nitin Patel announced that there would be no need for any kind of pass for movement in all the districts in the state except the content zone.

In Lockdown 4, business employment is exempted as per the rules given to the state governments. Markets in the non-containment zone have started opening after two months. He also emphasized on taking care of social distance etc. during the concessions given by the government so that business employment can be regularized now that people have stayed at home till now.