Smartphones have many features and powerful cameras, which increase their use. With this in mind companies are trying to reduce robust battery backup and charging time. But despite all these steps, your phone's battery doesn't last long. So here are some tips to increase the battery life of your phone. 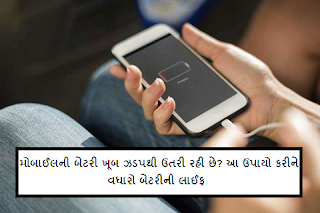 Close after using the app
The phone has a multitasking feature, but this feature consumes so much of your smartphone's battery. So after using the app, it should be closed. This will make your smartphone battery last longer. Some apps use data and batteries in the background, so the battery is consumed faster. Select it and turn it off in the background.

Do not let the phone overheat
Constant use of the phone makes it hot. So the phone should be kept in AC or some cool place. When the phone heats up, the mobile phone battery drains quickly. So the user should stop using it as the phone gets hot.

Phone Booster: Eliminate background and resource-hungry applications to speed up your phone
Junk Cleaner: Scans all system cache, app cache, log files, temp files and apk obsolete files and recommends removing them from your phone, freeing up memory and running your phone faster than
Battery saver: Scan and remove running apps that drain your battery in a few simple steps, when your phone is running low on battery power, the app will prompt you to save battery power by removing apps run in the background
CPU cooler: The CPU cooler can help your phone reduce CPU temperature with a simple operation.
Report charging process: Every time you charge the battery, after unplugging the phone from the phone, there will be a full report of information during the charging process including: charging time, the number % of battery charged, battery charging speed