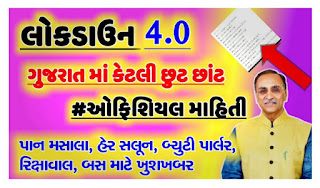 Today, Chief Minister Rupani has announced a relaxation of lockdown for Gujarat. In which many concessions have been given in the entire state except the containment zone. Discounts have been announced for auto rickshaws, bus services, offices, other shops, leaf galls. In Ahmedabad, shops and offices can be opened in the western area, but no concessions have been given in the first phase in the eastern area. However, a taxi service could be started, the chief minister said.

After the guideline of Lockdown 4 was announced by the Central Government, Chief Minister Vijay Rupani is going to hold a conference with top officials in Gujarat in two phases on the implementation of Lockdown 4 and concessions. In the first phase, a video conference will be held with 4 Municipal Commissioners at 11 am, while in the second phase, a video conference will be held with all the district collectors in the evening. The decision to lockdown and relaxation may be announced late in the evening after the meeting is over.

Excerpts from the Chief Minister's address on Lockdown 4 rules
>> Pan-galla, shops will be kept open in the western area of ​​Ahmedabad.

>> Hair salon can be opened in non containment zone.

>> Taxi service will be started in the eastern part of Ahmedabad.

>> Restaurants across the state will only continue for the purpose of home delivery in the canteen zone.

>> Private offices can be started with 33 per cent employees.

>> No concessions of any kind except essential items in the containment zone.

>> Sales of essential items are allowed from 8 am to 3 pm.

>> Autorickshaws will be started in the entire state except Ahmedabad and Surat. A maximum of two passengers can be seated in one rickshaw.

>> Diamond factory, looms factory can be started with 50 percent staff.

>> The people of Gujarat have been fighting against Korona for 54 days.

>> So far the public has cooperated in the lockdown.

>> Everyone accompanied by thinking of the other.