HuPanCoronaWarrior
Chief Minister Vijay Rupani on Wednesday launched an awareness campaign called 'I am also Corona Warriors' through Facebook, which will run from May 21 to May 7.

The Chief Minister said that during this campaign we should take care of three things, in which we take special care of the children and elders of the family, do not let them out of the house, do not go out without a mask and without a reason and thirdly let the physical distance between people Let's maintain. He also said that during this campaign, awareness messages will be given to the people by celebrities on a daily basis and on the 9th, take selfies with grandparents or elders and post them on social media as 'I am also a Corona Warrior'. 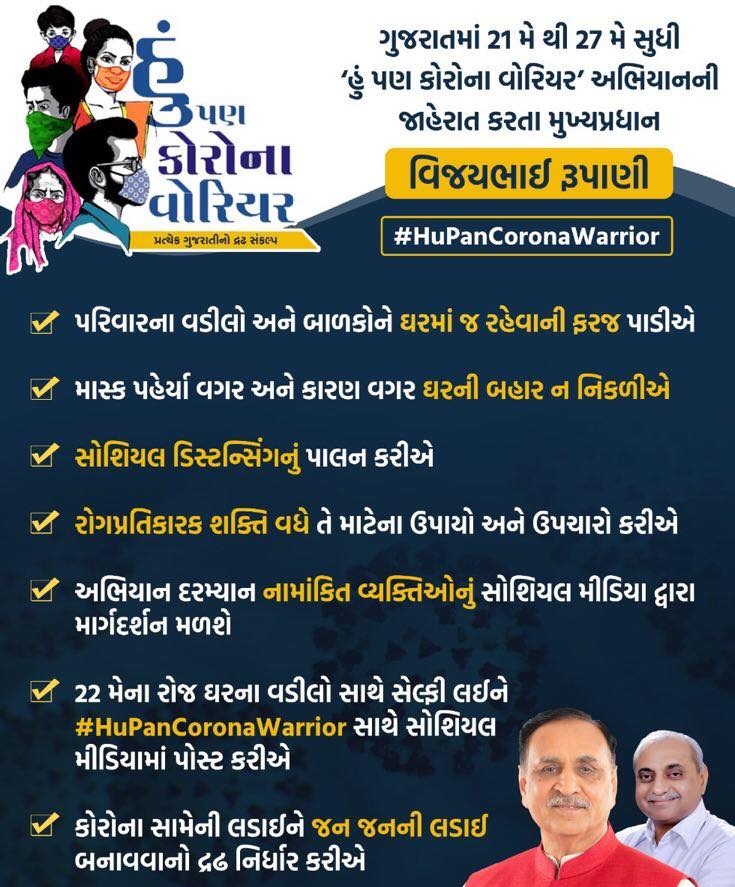 The CM made it clear that after almost two months of lockdown, extensive concessions have been made, so there is no need to assume that Corona is over, so far we were at home so it was safe, but now we have to go out for daily activities, so now A direct fight has started with Corona, Corona has not been diagnosed yet, so if something goes wrong, disaster could ensue, so now Corona We have to live and fight with and against this. This mantra is now to be assimilated.

We have to be vigilant to make this fight a battle of generations as we have to fight this whole war together against Corona and for this we have started a campaign called 'I am also Corona Warriors'.
The campaign, which runs from May 21 to 27, will be based on three issues.
1) Keep the elders Kanidai Lakia and the children in Akila's house,
2) Do not go out of the house without a mask and without need
3) Maintaining a distance of two yards, Kanidai Lakia covers three issues.