Repayment over a period of three years: No security required

Get a loan from the nearest co-operative bank: No EMI for 6 months

One million people in the state will benefit
The state government has announced a 3 per cent loan to boost the industry and the economy in Gujarat. Through Atmanirbhar Gujarat Yojana, small traders like traders, businessmen, hawkers, rickshaw pullers etc. will get the benefit of running a household. All you have to do is apply. After Prime Minister Narendra Modi spoke of a self-reliant India and Union Finance Minister Nirmala Sitharaman announced various packages, Chief Minister Vijay Rupani today announced a self-reliant Gujarat aid scheme in the presence of Deputy Chief Minister Nitin Patel and Minister of State for Home Affairs Pradipsinh Jadeja. 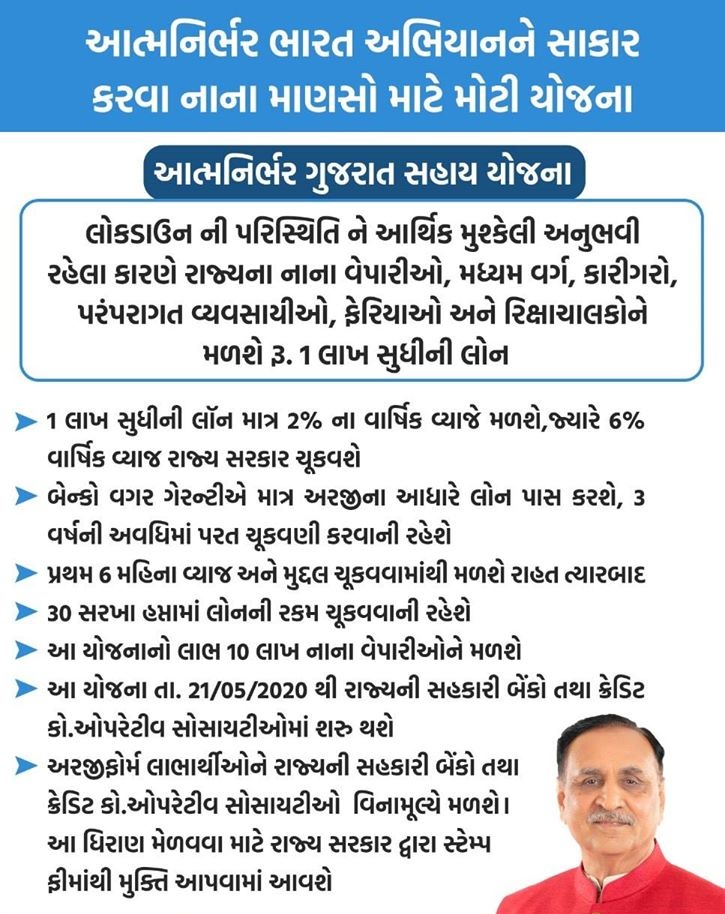 10 lakh people will get the benefit of Atmanirbhar Gujarat Yojana. Loans from banks have also been arranged under the scheme. Banks will pass loans only on the basis of application. A loan of Rs 1 lakh will be available at an annual interest of 2%. While 6 per cent annual interest will be paid by the state government, the first six months will not have to pay interest and principal. Detailed guidelines will now be issued.

A person will feel that he has got money without interest
Rupani said the borrower would not be paid installments or interest for six months. There is no guarantee or guarantee of taking a loan. We have discussed with the banks. These loans will be available for cooperative banks and credit societies. The state has 220 co-operative banks and 1000 branches.

Forms must be submitted by August 31
In this regard, Chief Minister's Secretary Ashwini Kumar said that such application forms can be obtained from about 1000 district co-operative bank branches, 1400 urban co-operative banks and more than 7000 credit co-operative societies across the state. To avail the benefits of this ambitious scheme, only the application form has to be filled and returned by 31st August. No other fees or charges will be levied for this purpose.