In 1958 A Small sparrow Caused Terrible Outages In China

It is a fact that in 1958 they suffered many losses due to the cyclone and nearly two and a half million people died. But it was not a mistake but a mistake. 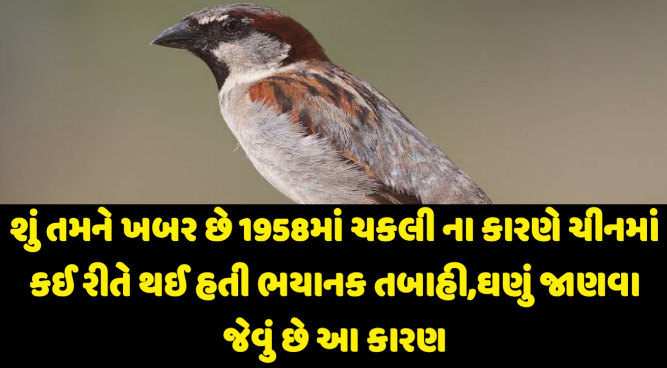 We always think that insects are endangered or that the animals around us are birds. That thing is really lazy and what difference does it make to live it?

But God did not create anything in vain. Everything that is not worthless is helpful.

All living beings around us help to maintain balance in nature. The extinction of any organism destroys the balance of one's whole nature. When we then have to suffer the consequences then it is understood that life is also our friend and it is also necessary to save our existence.

It was 1958 when Mao Jindong of China launched a campaign in China called Four Pets Campaign.

In which the order to kill mosquitoes, flies, mice and mice was issued. He said that the sparrows eat all the grain of farming. That's why it's so important to kill it. Damage to mosquitoes, flies and mice All know that mosquitoes are spreading malaria. Flies and rodents spread something differently. It was in the interest of men to clean them.

At that time for China, the revolutionaries launched this campaign as a movement among the masses. People used to blow up sparrows by playing mess and drums, and people were trying to make sure that the sparrows could not be eaten and could not find a place to sit. It would fly until the sparrows and finally get tired and they would be killed.

In this way, their eggs were discovered and their eggs were crushed, and so did their young children,
The situation was that the person who beat the sparrows was given medals and prizes at school colleges and events.

The sparrows realized that now there was no safe place for them, so many chakis made hut and hid in the embassy in Poland, but those who beat the sparrows reached there and there was blood on their head. His angel was surrounded and played so softly that all of them began to fade and die over the exhaustion of flying.