Jio VS Airtel, Voda-Idea: Which Company Has the Cheapest Plan?

Reliance Jio has introduced its new prepaid plans. Jio's new plans are 40 percent more expensive than the old ones. However, Jio claims that customers will get up to 300 percent more data benefits in their plan. Customers will be able to purchase the new plans from December 6.

Claims Jio's plans are cheaper than any other company

Jio's plans up to Rs 50 less than Airtel, Voda-Idea

Just a few days ago, Airtel and Vodafone-Idea released their plans. Jio also claims that its plans are cheaper than other companies. Let's know the distance between Airtel, Vodafone-Idea and Giona plans.

The new plans are as follows : 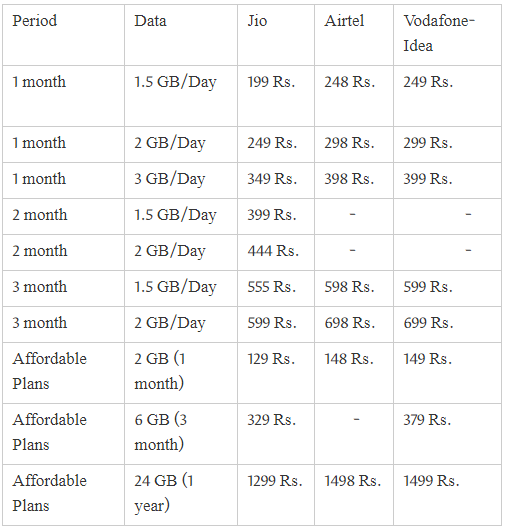 Consumers can save up to 15-20% on Jio's plan
Jio has claimed that in the industry's two best-selling plans - Rs 129 and Rs 199, consumers will be able to save up to 15-20 percent over Airtel and Vodka-Idea. Comparing prices, Jio's plan is cheap at Rs 50 for all three companies. To illustrate, Jio's plan of Rs 199 will get 1.5GB of data per day along with free voice calling. At present Airtel is offering this plan at Rs 248 and Vodafone at Rs 249.

Jio the only company offering a 56 day prepaid plan
It is worth mentioning that Jio is currently the only operator offering a prepaid plan with validity of 2 months or 56 days. Jio's Rs 399 and Rs 499 plan will get 1.5 GB and 2 GB data per day. In addition, there will be 2000 minutes of free calling along with 56 days validity. It remains to be seen whether Airtel and Voda-Idea also come up with 2-month plans in Jio's confrontation.

Annual prepaid recharge plans do not make much difference
Talking about one annuity prepaid recharge plans, the prices of these three companies are almost the same. In Jio's Rs 2,199 plan, you get 12,000 voice calling minutes with 1.5GB of data and 365 days of validity. Similarly, these plans will be offered by Airtel and Vodafone-Idea at Rs 2,398 and Rs 2,399 respectively.

JioPrep will also provide GeoPrime benefits to customers
With the benefit of this data and voice calling, Jio prepaid customers will also get access to GeoPrime benefits like 600+ TV channels, JioCinema, JioSaavn, JioNews, JioSecurity and JioCloud. While Airtel prepaid customers will be able to avail Airtel Xstream Premium, Wynk Music subscription, Free Hello Tunes and Anti-viral Mobile Protection from a starting plan of Rs 248.