Google Quantum Supremacy ! Google has achieved something that will take thousands of years to complete in a second

Tech company Google claims to have made a quantum computer. Google claims that this computer has reached quantum supremacy. Because it did one calculation in just 200 seconds which would have taken 10 thousand years to make the world’s fastest. 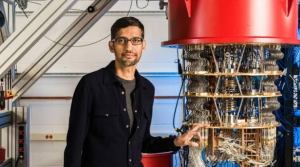 The idea behind quantum computing is that not only can the calculus speed be increased. But large calculations can be easily done. However, where a Traditional Computer stores any information in a binary system, ie 0 or 1. When this quantum computer stores it simultaneously in cubits 0 and 1. This can increase the ability to store any notifications.

However, according to a News report, this week the International Business Corp wrote in a blog that contradicted Google’s claim that the task performed by Google could be done on a computer with a large hard disk in 2.5 days. It has been written that quantum supremacy does not mean performing that task even though the classical computer cannot.

New technology will enable this work
Quantum computing is such a technology. Big data and information can be processed in much less time. With the help of quantum computers, the task associated with computing will be done in a very short time. It will take many years to complete the devices and technologies that are in place. With the help of this new processor, the task of the management and transport of the city will be made easier by inventing new drugs. 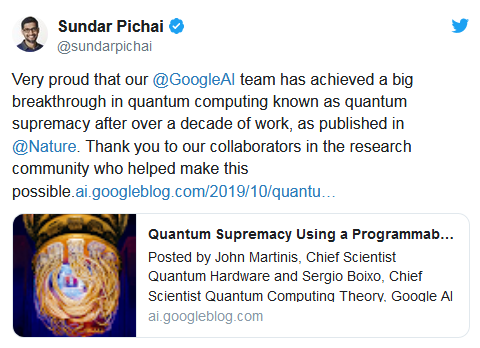 What is quantum computing
Quantum computing is also a technology currently being developed that is designed to increase the speed of calculation instruction processing. All major companies, including Google, have begun to develop this technology.

The quantum computer completed the complex computation in 200 seconds. That same calculation would take even the most powerful supercomputers approximately 10,000 years to finish, the team of researchers, led by John Martinis, an experimental physicist at the University of California, Santa Barbara, wrote in their study published Wednesday (Oct. 23) in the journal Nature.