Finance Minister Nirmala Sitharaman presents the first budget of Modi 2.0 government at 11 am today. Leading to expectations of a stimulus for a sluggish economy, growth has slowed down to a five-year low of 5.8%. The middle-class, on the other hand, is also expecting income tax relief from the union budget 2019.

Sitharaman, the second finance minister after Indira Gandhi, to present the budget, may have to do a tightrope walk balancing the needs of the economy and fiscal constraints in the budget. 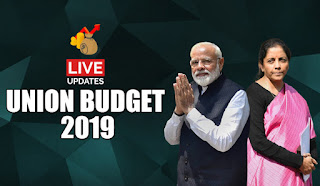 11:31 am: Local sourcing norms will be eased in case of single-brand retail

11:28 am: The finance ministry has proposed to Sebi to increase public-holding in listed companies to 35% from 25%.

11:27 am: Trading in corporate bonds would be made user-friendly: Sitharaman

11:27 am: Railway infra would need an investment of 50 lakh crores between 2018 and 2030; PPP to be used to unleash faster development and delivery of passenger freight services: FM

11:25 am: FM announces new scheme for shopkeepers based on self declaration.

11:23 am: “Current rental laws are archaic. A modern tenancy law would be finanlised and forwarded to states,”

11:23 am: Government envisions using rivers for cargo transportation, which will also decongest roads and railways : FM

11:22 am: “We don’t look down upon legitimate profit earning. Gone are the days of policy paralysis & license quota control regime. India Inc are India’s job creators, nation’s wealth creators. Together with mutual trust we can gain, catalyse past & attain sustained growth,” Sitharaman said.

11:21 am: The people of India have validated their two goals for our country’s future: national security and economic growth: Finance Minister

11:19 am: Movement of cargo on Ganga is estimated to rise 4 times in 4 years: Sitharaman

11:18 am: 657 km of metro rail network has become operational in the country: FM

Prime Minister Narendra Modi, who returned to a second term in office in May, has urged states to work together to tackle socio-economic problems, and make India a $5-trillion economy by 2024, which he said was a “challenging, but achievable” goal.

11:15 am: The govt has given a massive push for physical connectivity

11:14 am: We need to invest heavily in infrastructure and for job creation in MSMEs.

11:11 am: Sitharaman says we need to undertake many structural reforms.

11:11 am: We need to invest heavily in infra and for job creation in MSMEs: FM

11:08 am: It is well within our capacity to reach the $5 trillion economy in next few years: FM

11:08 am: Nirmala Sitharaman: The recent election was charged with brimming home and desire for a bright and stable ‘New India’. Voter turnout was highest; every section came to stamp their approval for performing government.

11:05 am: Have shown that “reform, perform, and transform” can succeed: FM

11:05 am: Confident that we will achieve goals: Sitharaman

10:52 am: While Sitharaman is unlikely to digress from the fiscal consolidation path, policy measures and incentives that the government may announce to boost the economy which is at a five year low of 6.8% in 2018-19 will be keenly watched.

10:44 am: Nirmala Sitharaman’s parents are at the Parliament to watch their daughter’s maiden budget speech.

10:22 am: As per tradition, the Union Cabinet will be shown a gist of the budget 10 minutes before the Parliament meets today.